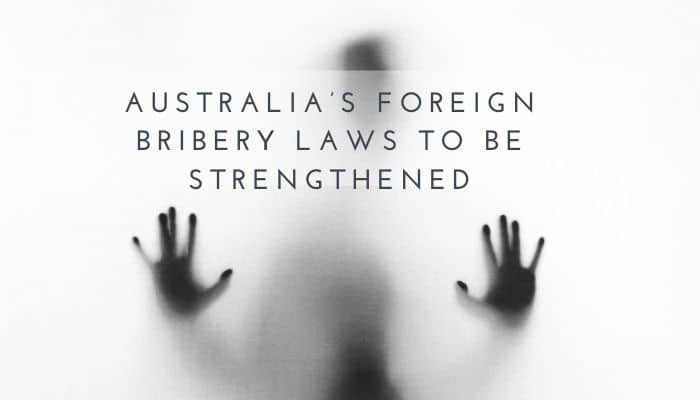 Changes are on the horizon for Australia’s foreign bribery laws. On 2 December 2019, the Australian government tabled the Crimes Amendment (Combatting Corporate Crime) Bill 2019 in the Senate, which, if made into law, seeks to introduce several key changes for the current regime, including by creating a new corporate offence of failure to prevent bribery by an associate, and the introduction of a Deferred Prosecution Agreement (DPA) scheme for the resolution of serious corporate criminal matters. The Bill is currently adjourned and set for further debate on 4 February 2020.

In parallel, the Attorney General has released a draft guidance document on the steps that corporations may take to prevent an associate from bribing foreign public officials. The Government is seeking admissions on this document prior to 28 February 2020.

What are the key changes in the Bill?

Looking forward, once the Bill is passed into law it means big changes in terms of corporate governance for companies that operate overseas or at least have a foreign presence. Importantly, all companies will need to ensure that they are taking positive steps to comply with the new laws. This means ensuring that they have ‘adequate procedures’ in place to protect the company from the actions of a rouge employee or partner. In our next blog post we will discuss the types of steps that companies can take as part of their corporate governance policy to ensure they will comply with the new guidelines. Interested companies and stakeholders should also consider making submissions to the Attorney General’s office in regards to the draft Guidelines prior to 28 February 2020.

Harris Gomez Group is a Common Law firm, with offices in Santiago, Bogotá, and Sydney. We also have legal teams in Peru, Bolivia, Ecuador, Brazil, and Argentina. Over the last 18 years, we have been supporting foreign companies with their growth in Australia and Latin America. Many of our clients are technology companies, service providers and engineering companies that focus on the mining, energy and infrastructure markets.

To better understand how we can support your management team in the Region, please contact us at hello@hgomezgroup.com