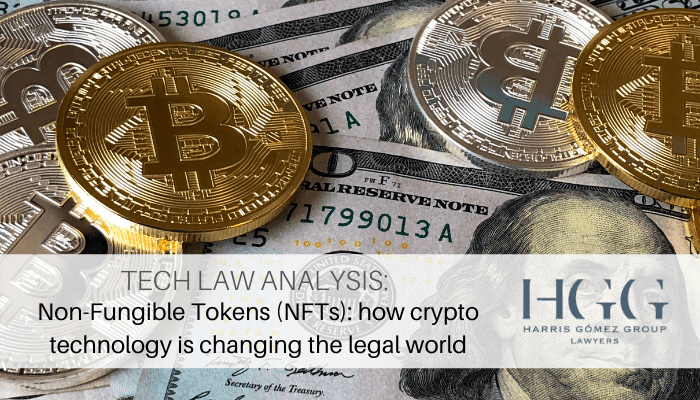 Blockchain and crypto technologies are changing the way we see the world, from financial technologies to technological contracts, and most recently, the digitalization of property. Many industries are shaping towards the ‘tokenization’ of goods, which we are seeing in the art and music industries. NFTs are a disruptive technology that certifies the domain over a token ledgered in a blockchain.

In order to understand how Non-Fungible Tokens work, we must understand the technological habitat that it operates under.

What is a blockchain?

A Blockchain can be defined as a time-stamped chain of immutable records linked by a cryptographic function, managed by a cluster of computers and not centralized by a single authority or administration. In other words, we can describe it as a decentralized ledger that tracks digital assets on a Peer-to-Peer network (P2P).

A P2P network means all the parties, known as nodes, can maintain, approve and update new entries to the network, each member ensures that all the records and procedures within the Blockchain are in order, maintaining as well the validity and security of the Data. Bear in mind as well, that any transaction of assets within the network has as requisite that the given nodes must have the assets beforehand.

How does it work?

Let’s put it this way, you are playing Texas Hold’em Poker but you don’t know any of the other players. After some hands of play, player A has to pay player B a certain amount of chips (assets), but in order to do so, players C, D and E (which previously have dealt with players A and B) validate that A is a player, that his chips are trustworthy and also show player B all the previous transactions A has done with them (all written down in a ledger book). Now B can be sure A is a real person and his poker chips have been used before in other transactions.

Now, someone could say the ledger which shows the previous transactions can be perfectly altered; Blockchain is the solution to ensure there’s no counterfeit.

Blockchain provides a secure (highly encrypted) ‘proof of work’, which means the technology itself provides a highly secure ledger which lets every node know all the previous transactions that a node has done. The ledger is encrypted and time-stamped, which protects against defrauding of the system. If someone is able to decrypt one of the transactions (which is mostly impossible to do), the other nodes will immediately deny it, as it affects the previous transactions in the ledger (because all of them are linked), so this makes it basically mathematically impossible to alter the records.

Blockchain deals with the transaction of tokenized goods in a secure network, most notoriously fungible tokens such as currencies.

A Non-Fungible Token is a type of cryptocurrency and can be a representation of any real or intangible goods, so you may buy a NFT containing artwork, music, or even digital assets of real goods.

Most recently, and given the context of the global pandemic, artists, developers and many industries have evolved towards the digital tokenization of their creations. An example of this is the American band ‘Kings of Leon’ which recently made an NFT album available for purchase in a blockchain based market, also the case of an artist Beeple, who sold art worth $69 million dollars through NFT bidding.

As a concept, we may define an NFT as a Token domain title or a digital certification that you are the sole proprietary of a non-fungible good. Blockchain comes as a support to authenticate the owner’s unequivocal property over the good. As said before, a Blockchain certifies, without the possibility of fraud, that there has been a legitimate transaction of assets from one node to the other.

To understand how NFTs and blockchain operate, we must understand smart contracts. As any contract, an ‘S-C’ establishes legally binding terms and agreements for the parties, the difference is that a Smart Contract does not need a public deed to be effective, the contract executes itself once the nodes (or parties) complete or stick to their side of the deal. Imagine a real estate transaction, node A wants to buy node B house, but they live thousands of miles away from each other, normally, they would’ve spend a lot of time and resources in certifying with a notary that node A is real and has real money and that node B is also real and has a house; a Smart Contract will immediately certify both parties and the assets, so the system would ask node A, beforehand, to have the amount of money agreed, acting as a ‘technological broker’, and as node A certifies it received the keys to the house or the legal titles to it’s domain, or even that the house has no mortgage, the contract will immediately execute as agreed, giving node B the money accorded, certifying the purchase as an NFT. In other terms, a Smart Contract automates the functions of both a notary and a broker.

In conclusion, crypto technologies are changing the way we see the world, from making people their own banks by decentralizing currencies to eliminating the necessity for public registries. It is urgent that national and international legislations adapt to blockchain and its applications.

Harris Gomez Group is an English and Spanish speaking law firm with 25 years experience based in Sydney, with sister offices in Chile and Colombia. We specialise in business, technology and corporations law and cross-border issues. Many of our clients are technology companies, service providers and engineering companies that focus on the mining, energy and infrastructure markets. We are members of both Australian Latin American Business Council (ALABC) and Auscham.

To better understand how we can support you, please contact Harris Gomez at hmg@hgomezgroup.com