Mining and Sustainability: A False Dichotomy 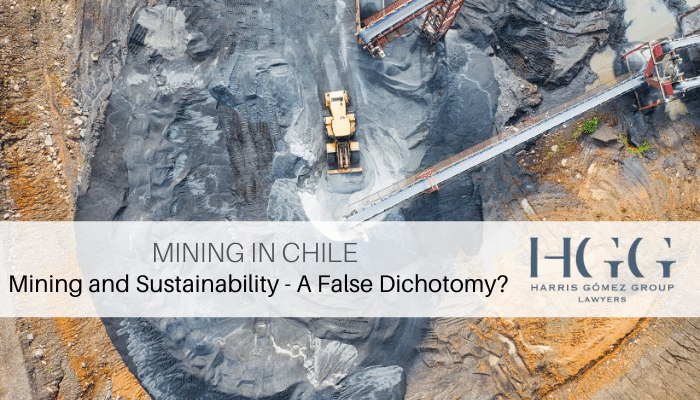 The ongoing reform to Chile’s Constitution has meant that the relationship between Mining and Sustainability in Chile has remained a key point of (sometimes heated) discussion.

While some organisations highlight the importance of mining for the generation of jobs and the economic development of remote and regional communities, other groups warn about the environmental impacts that mining practises could have on ecosystems.

The issues have been conflated to create two contradictory positions: on the one hand, those who consider the mining industry incompatible with Chile’s sustainable development strategies, and on the other, those who believe Mining is a fundamental pillar for such development.

Well, are Sustainability and Mining compatible?

When talking about Sustainability, we understand the meaning originated in the Brundtland Report, published in 1987 for the United Nations: “the ability to manage resources to meet current needs, without putting future needs at risk.” Today, a holistic concept of Sustainability has been derived from this original meaning, focused on the balance between economic growth, care for the environment, and social well-being.

It is widely recognised that mining has been one of the key engines in the development of the Chilean economy. The numbers support this: in 2020, and despite the pandemic caused by COVID-19, mining reached participation of 12.5% ​​in the national GDP (Source: SERNAGEOMIN, “Anuario de la Minería de Chile”), and mining exports represented 54.3% of the country’s total sales (Source: www.aduana.cl).

Historically the mining industry has focused its efforts exclusively on economic growth, leaving aside the other two pillars under the holistic concept of sustainability: caring for the environment and social well-being. Among the key main objections to the mining industry, people usually indicate the massive consumption of water resources (necessary for the mining operation) to the detriment of human consumption and other activities such as agriculture; the significant consumption of energy, mainly originated from fossil fuels; and the impact or alteration that mining projects generate on the environment and ecosystems.

The transition of the Mining Industry towards Sustainable Practices

Aware of these criticisms, the mining industry has decided to adopt sustainability as the central pillar of its activities in recent years. The industry is now committed to carrying out a radical change in mining, gradually introducing renewable energies and new technologies to its processes, and developing sustainability policies encouraging more community participation. Let’s see some examples:

About 30% of electricity in Chile is used in mining processes, and 40% of this energy is generated from coal (Source: Energy in Mining Report, Extraction Processes 2021). This means there is great potential for developing energy transition projects, incorporating clean energy into mining production processes, and contributing to the decarbonisation of the national energy matrix.

Mining companies in Chile have gradually started to use electricity from renewable sources. It is estimated that by 2023 63% of the electrical energy needs of copper mining will be covered by clean sources. According to the Chilean Copper Commission (COCHILCO), the percentage of the potential use of renewable energy concerning the total demand for electricity from copper mining is currently 10.5%, mainly from solar and wind sources. This figure is expected to quadruple to 49% by 2023.

Another mechanism to incorporate clean energies into the operations is the execution of power purchase agreements (PPA). Minera Los Pelambres (Antofagasta Minerals S.A.) covers 35% of its energy needs exclusively with solar and wind energy, acquiring the energy directly from the Photovoltaic Plant Javiera and the Wind Farm El Arrayán. For its part, Minera Candelaria signed in 2018 a PPA with AES Gener of 1,100 GWh/year from renewable sources, and in 2019 BHP Escondida-Spence signed a 10-year contract with Colbún and a 15-year contract with Enel. (Source: Generadoras de Chile: http://generadoras.cl/prensa/sector-minero-cuadruplicara-el-uso-de-energias-renovables-al-2023).

To achieve carbon neutrality by 2050, Chile has developed a series of measures aimed at the energy sector in recent years. The publication at the end of 2020 of the Chilean National Green Hydrogen Strategy stands out among these measures. This strategy seeks to promote the development of the hydrogen industry in Chile due to its great capacity to reduce greenhouse gases emissions in sectors of the economy that are most difficult to mitigate, such as mining, transportation, and agriculture.

In this context, on 23 August 2021 Anglo American announced that it would be the first mining company in Latin America to build and start a hydropower plant at the Las Tórtolas operation, marking a milestone in the development of the green hydrogen (H2v) industry in Chile. The project is part of the company’s Sustainable Mining Plan that aims to achieve carbon neutrality in its operations in Chile by 2030.

It is expected that the development of the green hydrogen industry in Chile will allow the mining industry to experience a safe transition from fossil fuels to meet its energy needs and also contribute to meeting the goal of decarbonization.

Mining companies have chosen to use seawater for their production processes to face the scarcity of water resources that affect Chile. Currently, Chile has in studies the development of 15 desalination plants and seawater impulsion systems (direct use without desalination) that will be operating in the country by 2028.  It is expected that by 2031 53% of the water resources used in mining come from continental water and 47% from the sea. (Source: ALADYR: https://aladyr.net/chile-15-proyectos-de-plantas-desalinizadoras-o-sistemas-de-impulsion-de-agua-salobre-estan-en-carpeta-al-2028-en -sector-mining /).

One example is Chile’s Antofagasta Minerals. The company, in April 2021,  presented to the SEA regulator the environmental impact study of a US $ 1 billion project to guarantee the continuity of the Los Pelambres copper mine in the Coquimbo Region, given the shortage of water in the area. The project includes the reinforcement of the industrial water supply through desalinated water for production processes. The works will take 36 months and will start in 2023.

Another case is Codelco, which at the end of 2019, after an exhaustive bidding process, was awarded the project for the development, construction, and operation of a desalination plant to supply water to the Chuquicamata, Radomiro Tomic, and Ministro Hales divisions. The project will allow the company to gradually increase the use of seawater instead of mountain water in all its operations located in Calama. It is expected that by 2029, of all water Codelco will require in this area, 64% will come from the ocean. This project is considered a critical project that will allow the state mining company to continue the sustainable development of its operations in the northern district.

There is a false dichotomy between Mining and Sustainability. Both concepts are perfectly compatible, complementary, and necessary.

Since mining is considered a fundamental pillar for economic development, the industry must increase its efforts to find a balance between economic growth, care for the environment, and social well-being (commonly known as Environmental, Social and Governance considerations).

Mining companies have the means and resources to participate actively in the development of sustainable measures. This requires embracing new technologies, incorporating renewable energies into mining processes, and implementing best practices about water resources.

A mining company that understands the importance of Sustainability and implements plans to improve its own sustainability measures will always be considered a partner of any Chilean Sustainability Development strategy.