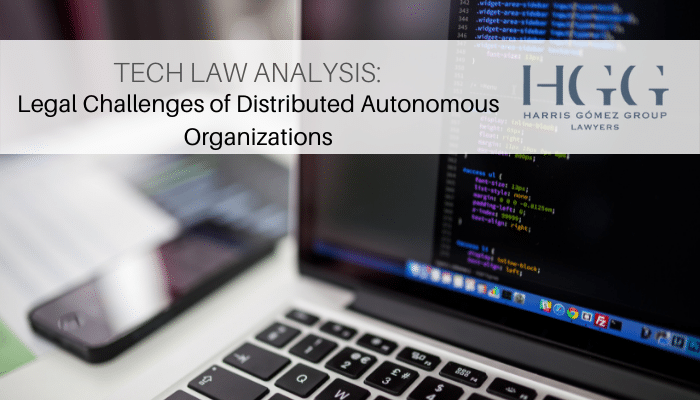 Since the 2008 global financial crisis, many industries have sought business opportunities where there is no intermediary and that may cover a global market with the internet. This boom in international business brought many interesting and disruptive ideas, such as fintech and crypto currencies, but also many challenges. In the present article, we’ll discuss what Distributed Autonomous Organizations (DAOs) are, what their business model is and what legal challenges it faces.

The blockchain ecosystem has many paths. The most known usage of Distributed Ledger Technologies (DLTs) has been for financial purposes, mostly payments. But recently, companies seeking to globalize business while maximizing equity without the need of intermediaries or slow and expensive processes, sought out DAO business model, i.e, a blockchain based corporate structure. A Distributed Autonomous Organization is a decentralized corporate governance structure/protocol where the people involved in the decision making or development of a common enterprise are governed by a decentralized self-deployable set of rules (i.e: smart contracts) backed by public or private Blockchain decentralized ledgers, allowing them to coordinate from anywhere, without the possibility of forgery, fraud or coercion. In simpler words, it is a decentralized organization of a business where the shareholders can be anywhere in the world and be part of the decision making through a trustful and transparent algorithm backed by a blockchain-based ledger that executes automatically the decisions taken once every party complies with what is accorded. It also allows for third parties to collaborate with the development of a business without the need of trust or escrows, due to the computerized rules which are applicable to anyone and impossible to contravene.

Given the decentralized nature of DAOs, businesses are allowed to have a bigger amount of participation, more partners, shareholders or collaborators; and don’t have to deal with the normal problems of coordination, as it is all written down in a computer code that executes itself.

There are many ways Decentralized Autonomous Businesses may gather money, the most common to date are Initial Coin Offerings (ICOs), discussed in previous articles, where the company issues/offers a digital token for a certain amount of money, backed commonly by a blockchain DLT and allowing that token to either be expended on what the business produces or swapped with other coins/tokens (such as Bitcoin or Ethereum). Another common example of how these businesses gather money are through “gas fees” which basically are taxes paid by a person/business in a cryptocurrency exchange when someone wants to buy, sell, trade or stake their coins/tokens within the business’ ecosystem.

A company that uses a DAO structure is known as a Decentralized Autonomous Company (DAC).

Using a hypothetical example, a company with a similar business model to Uber’s, which we’ll call “CryptoDrive”, wants to create a decentralized driver’s ecosystem, where anyone wanting to drive people for money may charge an agreed fee to their clients, and the DAC will charge them a “gas fee” for using its system. This allows for the driver to have their own clients but have the infrastructure provided by CryptoDrive, where they can be paid in cryptocurrencies, with a smart contract and many other benefits that the ecosystem may provide. This is how a decentralized/distributed management would best work.

Even though this business model may sound interesting, it carries many legal and regulatory issues, which limits the growth potential of these organisations.

The most notorious challenge is the regulation of those participating in the organization. DAOs do not have a central management, which creates tensions with many regulators. In that sense, if there is no central corporate structure, then, who is legally liable for the company? How are taxes paid? Modern DAOs have solved these challenges by appointing a representative within the organization, who is tasked with tax payment and acting as the representative for the company. Generally this will be someone with active participation in the business or a founder.

DAOs are commonly backed by Ethereum-based ecosystems, which operate under the consensus protocol known as “Proof-of-Stake”. PoS is a validation method, where the validator node is randomly selected to audit movements within the ledger by locking up or ‘staking’ the common currency (e.g Ethereum). If the validator approves an illicit or wrong transaction, he/she loses the staked token. That way, the system is incorruptible.

Having that solved, the next problem is with the nature of the relations created by the organization; some of the participations of the company may be considered a security, thus many DACs must be aware of the legislations that may apply to their businesses. The SEC has prosecuted some DACs for securities fraud, that was the case of “The DAO”, which was the first ever decentralized business organization. In order to acknowledge if a DAC must comply with any securities law, it is common to run the Howey Test, which basically lets us understand better if these organizations have such nature. The Howey Test consists of four questions which the business must ask itself:

A third problem to solve deals as well with the nature of the relations created by the DAC/DAO. After learning if the company is or it is not a security issuer, we must analyse if those participating in the development of the business are independent collaborators, shareholders or employees of the company. The answers may vary depending on the type of business and the legislation they are registered to.

Here we add a diagram that illustrates how a DAO/DAC is structured: 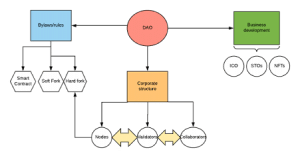 DAOs are a very interesting innovation of corporate structures with many possibilities of growth. While they are an interesting alternative to traditional corporate standards, DAOs have many legal challenges to be faced, while operating in a world with little to no legal structure that supports their business.